“I looked for someone among them who would build up the wall and stand before me in the gap on behalf of the land so I would not have to destroy it, but I found no one.” Ezekial 22:30 Following the Ferguson, Missouri media diversion and riots, there is now mass dissension and senseless rioting in the streets of Baltimore over the death of Freddy Gray in an arrest a few weeks ago.  Whether proper procedure in arresting Mr. Gray was used or not will forever be debated.  There are six police officers charged now for his murder.  But this is not the topic of today’s discussion. As a product of these riots and acts of thuggery, there has a been a rash of images posted via social media and main stream media of protesters trampling and desecrating the United States flag.  Most people don’t understand the laws or history surrounding flag desecration.  Following is a brief history:

Images of protesters trampling the flag as shown below are a slap in face to veterans of the armed services who fought to uphold our freedom.  Veterans and most people with decency and common sense know that freedom is not free but those misguided individuals who desecrate the US flag spit in the face of the men and women that provide that freedom for them. They know not what they have, were taught no better and, thus, have no gratitude or respect for anyone or anything. 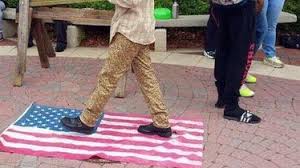 This is one with two fine upstanding members of society using the Black Panther sign….. remember them?

Doesn’t it make you happy to know President Obama and the US Attorney General Eric Holder seem to welcome this sort of activity, allow illegal aliens to desecrate our US flag while paying their grocery and housing expenses with your tax money!  Isn’t it time to put an end to this?!

Forty-eight (48) states have statutes making it a crime to desecrate the US flag.  What about North Carolina law?  And does NC law trump federal law?

We contacted the NC Attorney General, Roy Cooper’s office in Raleigh requesting some interpretation and explanation.  We wanted to find out if this statute is defensible and can it be upheld?  What is the State Attorney General’s official position?  After being shuffled between the AG’s office to NC Dept. of Justice and then back to the AG’s office we were “allowed” to leave a voice message with an assistant.  Up until then, receptionist was adamant that this was a federal issue and we were wasting our time, but in the same breath admitted she had no knowledge of the matter.  The assistant has not bothered to return our call.  We’ll let you know if/when she does.  If you would like to know where North Carolina stands on flag desecration we encourage you to contact the NC Attorney General’s office.  Let me know how that goes. The Daily News Fix believes flag desecration is a state matter.  North Carolina, as a sovereign State, should not only enforce, but defend our flag as a symbol of freedom and liberty.  Will the ACLU object?  Most certainly.  But, North Carolina is home to multiple military bases.  Our men and women in uniform put their lives on the line every day and they deserve more respect than this, as do all Americans.  It is up to those of us whom recognize the slow progressive erosion of our liberties and freedom to “stand in the gap”.  If WE don’t stand to secure our children’s future, who will? “Never surrender your rights, never give up, never shut up, and keep getting up.” ~ John Nix and the Daily News Fix